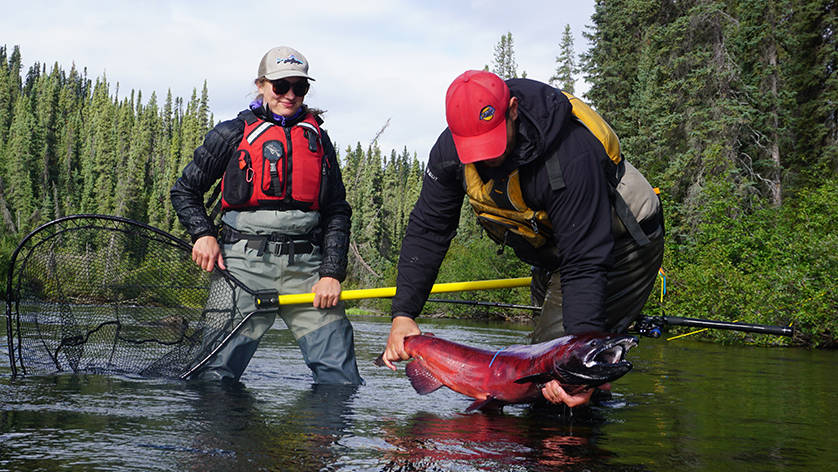 Over the past two decades, EDI Environmental Dynamics Inc. has collaborated with Indigenous communities across western and northern Canada to build better projects and create lasting relationships. The Teslin Tlingit Council (TTC), with help from EDI, is trying to restore the Chinook salmon population in Deadman Creek, a tributary of Teslin Lake in southern Yukon. The TTC, a self-governing First Nation in Yukon and British Columbia, is intimately connected to Chinook salmon. Ben Schonewille, a fish and wildlife biologist with EDI, has been working with TTC since 2015, helping to develop options and apply methods to restore salmon to the creek. The project is of particular interest to Ben, who grew up in the community of Teslin, a short distance from Deadman Creek.

Chinook salmon (Oncorhynchus tshawytscha) hatch in the Teslin River watershed at the headwaters of the Yukon River in the traditional territory of the Teslin Tlingit people. The salmon then travel 3,000 km downstream to the Bering Sea. Five to seven years later, as adults, they return to spawn and complete their life cycle. Chinook salmon must successfully migrate through fisheries and environmental threats on the Yukon River when returning to their spawning grounds.

Chinook salmon are a vital resource for the Teslin Tlingit people in terms of both subsistence and cultural identity. In the 1980s, the Teslin Tlingit people recognized that the Chinook salmon population was declining and, by the early 1990s, began self-limiting their harvest. In recent years, they have decided that a more hands-on approach to population restoration is required to provide future generations with opportunities to co-exist with Chinook salmon.

An analysis done by EDI in 2015 identified Deadman Creek as a suitable location for Chinook salmon restoration. At that time, the creek lacked a spawning population, but local and traditional knowledge indicated that it once had a small spawning population. In 2016, TTC and EDI undertook a pilot project to re-introduce a spawning population of Chinook salmon in Deadman Creek using instream egg incubation methods. These methods involve collecting eggs and milt from spawning salmon in the Morley River (a river near Deadman Creek with a self-sustaining population), fertilizing the eggs on site at Deadman Creek, and then planting the eggs in the creek (Map 1). A portion of the eggs collected are placed back into Morley River to offset the removal of eggs to Deadman Creek. Ben explains that, “even though instream incubation is more difficult to implement than restocking with hatchery-reared fry, TTC chose to go with this method because it maintains the genetic integrity of the wild population and allows the eggs and alevin to develop at a more natural rate. This makes it more culturally acceptable to the TTC.”

EDI and TTC have been working together to revise and repeat the Chinook salmon restoration project on an annual basis. Over time, adaptive management has been used to improve methods based on learnings from previous years. Ben reports that, “following the latest instream incubation efforts starting in 2018, emergent salmon fry have been found in Deadman Creek, indicating another positive step toward the restoration of the spawning population in Deadman Creek.”

CLICK HERE to learn more about our collaborations with Indigenous communities.

READ MORE about Ben and EDI in the Teslin area.

LEARN MORE information on the aquatic services provided by EDI. 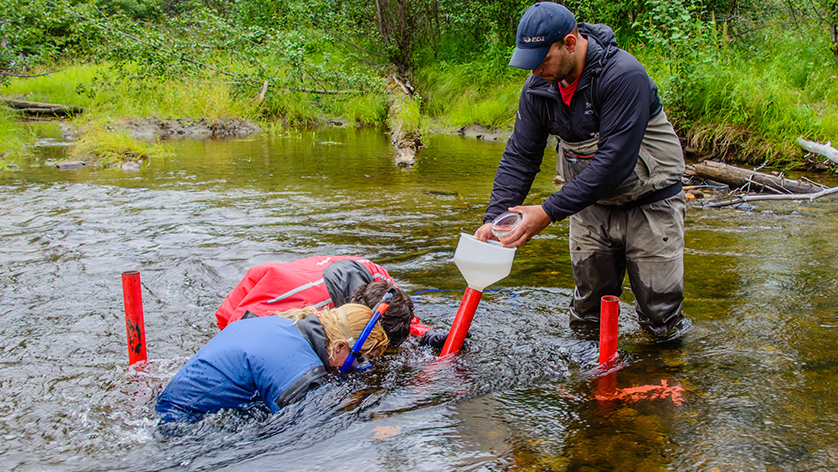